First tip of the day: Always always ask your wife before locking the luggage.

Trying 1000 combinations after a 9-hour flight was not fun. Trust me! 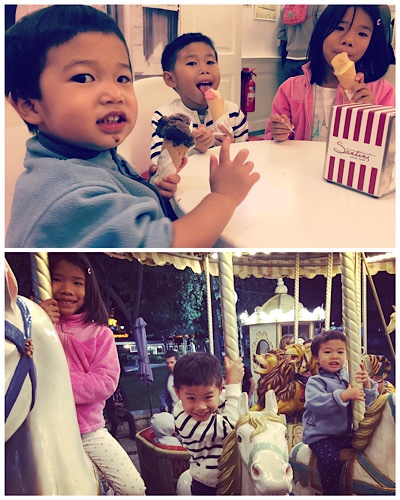 The first part of our summer trip started in Cascais , historically a holiday destination of the Portuguese nobility. Today, it’s an attraction to tourists and locals from nearby cities, most notably from Lisbon. The beach was beautiful, but packed with people with not an inch of sand going wasted. Personally, I found this famous fishing town was losing its charm due to the density of tourists. In addition, the water was very cold and the beach was quite windy for a pleasant beach visit. Instead, the kids spent their days in the swimming pool and the nights in the old town for ice cream.

We also explored Praia Do Guincho, a famous spot for wind surfing. Of course we didn’t know that. See the orange dot? That was us, before the wind blew both us and our umbrella up to the sky.

On the bright side, the food was so fresh, simply prepared, and cheap!

For one-day excursions, we took the kids to Lisbon, took the famous tram number 28, that toured around many key sight-seeing in the city. Here was me and my son on the tram. 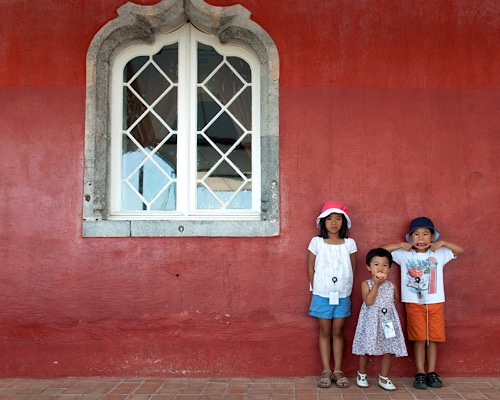 When the kids seem to have enough of the beach and city tours, we had a full day at Lisbon aquarium (Oceanario de Lisboa) and another day at the Zadrim Zoologico where they could run and explore trees and animals that were more exciting for their age.

While the kids were with their grandparents in Cascais, hubby and I took a short honeymoon week in nearby Lisbon. We explored the cities just like the pre-kid days. That meant partying with friends until late, and doing everything spontaneously. Spots that we like included: Belem tower, Padrao dos Descobrimentos, Praca do Comercio, Lisbon Cathedral, Ascensor da Gloria, Time Out market, LxFactory and Museu de Arte, Arquitetura e Tecnologia.

We had a chance to discover the cuisine of Jose Avillez, and immediately fell in love with his creativity and refine through his food. We first had a supposed-to-be-low-key dinner at Cantinho do Avillez. The food was simple, yet always came with an amazing twist (think a chocolate cake with peppercorns) that kept surprising us. We decided to book his gastropub called Mini Bar the following night. His tasting menu was executed as a theater performance: intense and surprising flavor in tiny small portions that always left us guessing and wanting more. We couldn’t help but persuaded our friends to join us for a feast at chef Avillez’s two-Michelin-star Belcanto. It was amazing! And he signed our cookbook!!! 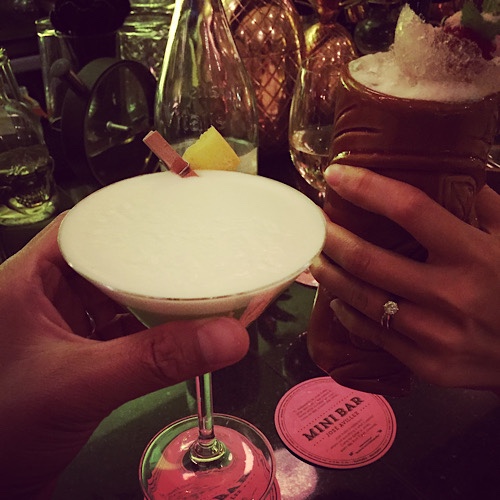 We loved Porto!!! Saying the city was adorable was still an understatement. We spent days walking around the city: Cais de Ribeira (a picturesque riverside area and a hive of commerce of Porto), Luis I Bridge (an iconic bridge linking the Port wine houses with the bustling downtown of Ribeira district), Muralha Fernandina (a medieval outer wall just up from Luis I Bridge where the view was breathtaking), Porto Cathedral (the most important religious edifice of the city), Livraria Lello (the library with a century of heritage that inspires Harry Porter’s book series).

After bribing them with candies and coca cola, these are the best smiles I could get… Bonus: Luis I Bridge was right behind us.

Me: What do you think of the rabbit?
Kiddos: It smells bad. Yuck!!

Big hello from the five of us in Porto!